Skip to content
Home > About > Ramakrishna and His Disciples 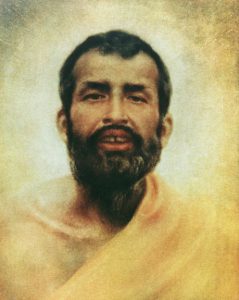 Sri Ramakrishna (1836-1886), great mystic saint of India, is regarded by millions the world over as a divine incarnation. His early life was devoted to the practice and testing of a variety of spiritual disciplines, including those of Hinduism, Christianity, and Islam. After realizing God in each of those religions, he declared that all faith paths, if followed with earnestness, lead to the same God-realization. Ramakrishna’s life therefore embodies all spiritual ideals and represents the harmony of the world’s great religious traditions. Five of his disciples spread the message of Vedanta in the United States and Europe.

Sri Sarada Devi (1853-1920), also known as Holy Mother, was the spiritual consort of Sri Ramakrishna, and she is regarded as his first disciple. After his death, Holy Mother carried on Sri Ramakrishna’s spiritual ministry, guiding and blessing thousands of devotees. Several of her disciples worked in Vedanta centers in the West. Her last message was: “My child, if you want peace, then do not look into anybody’s faults. Learn to make all your own. No one is a stranger. My child, the whole world is your own.”

Swami Vivekananda (1863-1902), chief apostle of Sri Ramakrishna and heir to his master’s spiritual treasures, organized the Ramakrishna Order of India. In 1893 he brought to the West the bold message of Vedanta when he represented Vedic religion at the Parliament of Religions held in Chicago. In 1897 he started the Ramakrishna Mission in India. In 1894 he founded the Vedanta Society of New York and in 1900 the Vedanta Society of San Francisco. His life was dedicated to recasting the ancient wisdom of Vedanta to show its practical application in helping humankind to experience God as Truth. Vivekananda said:

“All Truth is eternal. Truth is nobody’s property; no race, no individual can lay any exclusive claim to it. Truth is the nature of all souls.”

“Religion is realization; not talk, nor doctrine, nor theories, however beautiful they may be. It is being and becoming, not hearing or acknowledging; it is the whole soul becoming changed into what it believes. That is religion.”

Swami Brahmananda (1863-1922), is regarded as the spiritual son of Sri Ramakrishna. He was a spiritual dynamo and for more than twenty years guided the Ramakrishna Order as its first president. One of Swami Brahmananda’s brother disciples said of him: “God is love. Swami Brahmananda has realized God. Therefore he is full of love.” It has been said that the swami had the power to uplift a person’s mind to such an extent that when one left his presence, one felt bathed in love and purity. Many of his disciples taught the universal message of Vedanta in the West, including Swami Satprakashananda, who founded the Vedanta Society of St. Louis in 1938 and the Vedanta Society of Kansas City in 1947.