Sri Ramakrishna (1836-1886) is one of the greatest mystic saints of India. He realized God first in Hinduism and then practiced Christianity and Islam. After realizing God in different religions, he proclaimed, “As many faiths, so many paths.” 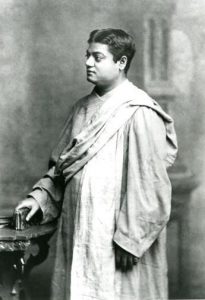 Although Vedantic teachings have influenced prominent Western thinkers for centuries, the formal Vedanta movement in the West was initiated in 1893 by Swami Vivekananda (1863-1902). The swami was the chief disciple of Ramakrishna. Vivekananda represented Hinduism at the Parliament of Religions held at the 1893 World’s Fair in Chicago and then disseminated the teachings of Vedanta throughout the United States and Europe.

Since then the message of Vedanta has continued to spread in the West under the leadership of the swamis of the Ramakrishna Order of India, a monastic institution with headquarters at Belur Math near Calcutta. The Ramakrishna Order is an important religious and philanthropic organization with branches all over India and permanent Vedanta centers in the United States, Canada, Europe, South America, Australia, Africa, Japan, and other countries. The Order’s spiritual lineage is the ancient Vedantic order of sannyasins (monks) which from the earliest time has existed in India in an unbroken line of teachers and disciples.

In America, Vedanta societies promote the study, practice and teaching of the philosophy and religion of Vedanta, especially as expounded by Sri Ramakrishna and his disciple Swami Vivekananda and demonstrated in their lives.