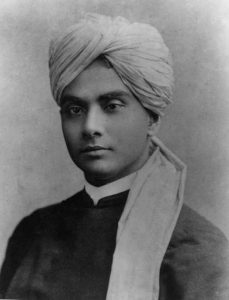 Born in a fairly well-to-do family, Kali had a great eagerness to learn yoga from his boyhood. He gained a good grounding in Sanskrit and English. At the age of 18, when he was studying for the school final examination, he went to Dakshineswar and met Sri Ramakrishna. Under the guidance of the Master, Kali practised meditation and was soon blessed with several visions.
Kali became a frequent visitor to Dakshineswar. He served the Master during his last illness. After the Master’s passing away, he joined the Baranagar Math and underwent sannyasa ordination, assuming the name Swami Abhedananda. At the Baranagar Math he used to shut himself up in a room and do intense meditation or study. This earned him the sobriquet “Kali Tapasvi”. He spent several years visiting places of pilgrimage on foot.

In 1896 Swami Vivekananda brought him to London for Vedanta work there. The next year he crossed over to USA and was given charge of the newly founded New York Vedanta centre. His profundity of scholarship, incisive intellect and oratorical power elicited widespread admiration, and people thronged to listen to him. He was also a prolific writer and his books on life after death, etc are famous.

After his long and successful work in America Swami Abhedananda returned to India in 1923. Soon he established a separate organization named Ramakrishna Vedanta Math and started living at the new centre. However, he maintained cordial relationship with his brother monks at Belur Math which he visited occasionally. He presided over the Parliament of Religions at the Town Hal, Kolkata, as a part of the celebration of the Birth Centenary of Sri Ramakrishna.

Of all the contributions that Swami Abhedananda made to Ramakrishna Movement, the most widely appreciated and enduring one is his composition of sublime and beautiful hymns (in Sanskrit) on Sri Ramakrishna and Sri Sarada Devi. His hymn to Holy Mother beginning with Prakritim paramam abhayam varadam, which is sung in many ashramas and homes, is unrivalled in the depth of conception and felicity of expression.