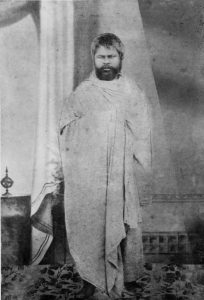 Speaking about Latu Maharaj, Swami Vivekananda once said, “Latu is Sri Ramakrishna’s greatest miracle. Having absolutely no education, he has attained the highest wisdom simply by virtue of the Master’s touch”. Latu was the only disciple of Sri Ramakrishna who could not even read or write. He was born of very poor parents in a village in Bihar. He lost his parents in early boyhood. Poverty forced his uncle to take him to Kolkata where Latu was employed as a houseboy in the house of Ramachandra Datta, a close devotee of Sri Ramakrishna. The Master recognized the dormant spiritual potential in the boy and asked Ram to allow Latu to stay at Dakshineswar as an attendant. Under the guidance of the Master Latu practised intense sadhana, spending whole nights in meditation, a habit which he followed all through his life.

After Sri Ramakrishna’s passing, Latu joined Baranagar Math, and was ordained a sannyasin bearing the name Adbhutananda. He, however, spent most of his time in contemplation on the bank of the Ganga or in a room in Balaram Babu’s house.

Swami Vivekananda established Ramakrishna Mission on 1897 and Belur Math in 1898. Latu Maharaj with his deep absorption in contemplative life could neither take up the service activities of the Mission nor follow the discipline and routine of the monastery. So Swami Vivekananda permitted him to follow his own way of life. After some years Adbhutananda moved to Varanasi where he lived alone, but his needs were taken care of by the Ramakrishna Home of Service. At the end of a brief ailment he passed away in a meditative state on 24 April 1920.