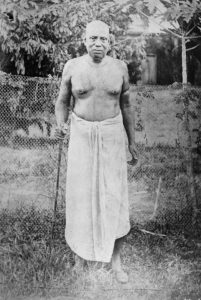 Advaitananda was oldest in age among the disciples of Sri Ramakrishna; in fact he was older than Sri Ramakrishna himself by eight years. Hence the Master used to call him ‘Budo-Gopal’ (Elder Gopal); to all the others he was ‘Gopal-da’.

Gopal-da was an employee of Beni Madhav Pal of Sinthi who was a Brahmo and also devoted to Sri Ramakrishna. At the age of 55 Gopal-da lost his wife, and became grief-stricken. A friend took him to Sri Ramakrishna. After two or three visits he was so much drawn to the Master that he gave up hearth and home and came to live with him. Gopal-da was the only male devotee, other than Latu, to whom Holy Mother Sri Sarada Devi talked directly. He would run errands and do shopping for her. During Sri Ramakrishna’s last illness Gopal-da served the Master with devoted care.

After the Master’s passing, Gopal, Latu and Tarak continued to stay at Cossipore garden-house for some more time, and they were the first to join the Baranagar Math. He underwent sannyasa ordination and became Advaitananda. After a year he went out on pilgrimage to different places and also did tapasya for several years in Varanasi.

When Belur Math was established he settled himself permanently there, and did various types of work especially growing vegetables. After a brief illness he passed away, while remaining fully conscious, on 28 December 1909.