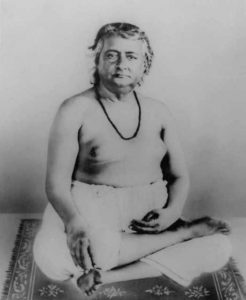 Swami Akhandananda, the third President of the Ramakrishna Math and Ramakrishna Mission, was born on Friday, 30 September1864, in North Kolkata. His pre-monastic name was Gangadhar (Gangopadhyay) Ghatak. His father was Srimanta Ghatak and his mother was Vamasundari Devi.

Gangadhar had an austere disposition since his boyhood. His spiritual bent of mind and search for the highest truth brought him to Sri Ramakrishna at Dakshineswar in May 1883. Gangadhar was very young at that time. He was dear to Sri Ramakrishna and Swami Vivekananda fondly used to call him ‘Ganges’. After the ‘Mahasamadhi’ of Sri Ramakrishna, he went on a pilgrimage, wandering throughout Northern India. As a wandering mendicant, he climbed the untrackable hills and mountains of the Himalayas and visited many places. His wanderings took him to Tibet more than once. He then came back to the Baranagore monastery and took the monastic vows in July 1890 and was named Swami Akhandananda, meaning unbroken joy. After this, he travelled with Swami Vivekananda and visited many parts of Northern India and the Himalayas as well as Gujarat and Rajasthan.

During his stay at Rajasthan, Swami Akhandananda started a school for the children of the slaves (called ‘Gola’) of the kings of Khetri. This sort of services rendered was a pioneering one ever-attempted in history. Later, during his visit to the parts of famine- stricken Bengal in Murshidabad district, he took upon himself the task of serving the famished people by distributing rice as ration, on 15 May 1897. This was the first public undertaking of relief work launched by the newly formed Ramakrishna Mission.

Swami Akhandananda successfully carried out the work of service. As a part of the follow-up programme of the relief work, he started an orphanage which developed into a full-fledged school at Sargachhi. Since 1897, Swami Akhandananda devoted his entire life working for the poor and the orphans, at Sargachhi. He became the Vice President of the Order in 1923. In March 1934, he was made the President of the Order, after the demise of Swami Shivananda.

His monastic life was remarkable for his unprecedented service activities, when India was facing the blow of natural calamities. He was hard- working by nature and had studied diverse subjects. But large-heartedness was his hallmark. He inspired many young people to take up service activities as a path to spiritual attainment. Amidst the centenary celebrations of Sri Ramakrishna, Swami Akhandananda left for his eternal abode on Sunday, 7 February 1937 at the ripe age of 72 years 4 months.