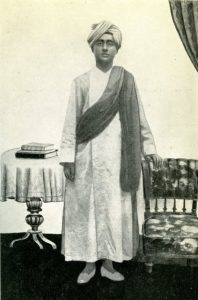 Born in an orthodox family Gangadhar lived a pure, disciplined life from boyhood. At the age of nineteen he went to Dakshineswar Kali temple. Sri Ramakrishna received him cordially and gave him several instructions. Since then he started visiting the Master and also cultivated friendship with the other young disciples, particularly with Naren (later, Swami Vivekananda).

When the Baranagar Math was formed after Sri Ramakrishna’s mahasamadhi, Gangadhar did not join it immediately. Instead, he set out on a long pilgrimage in 1886 which took him to different places in the Himalayas and Tibet. After three and a half years, he returned to Baranagar monastery in June 1890. He then took sannyasa vows formally and assumed the name Akhandananda.
In mid-July 1890 Swami Akhandananda again set out, this time in the company of Swami Vivekananda, on a pilgrimage which took them to different places in the Himalayas. When Swamiji left for the West, Akhandananda continued his wanderings in western India. Towards the end of 1895 he returned to the Math which had been shifted to Alambazar in Kolkata. When Swami Vivekananda, after his return from the West, reached Kolkata in February 1897, Swami Akhandananda enthusiastically participated in the reception accorded to Swamiji.

After a few days, when Swamiji left for Darjeeling, Akhandananda travelled towards Murshidabad. Reaching there he was distressed to find a famine raging. He immediately started famine relief work with whatever he could collect. Later Swami Vivekananda sent more funds and the relief operation was organized on a full scale. This was the first relief operation organized by Ramakrishna Mission.

After relief work Akhandananda started an ashrama with an orphanage in Sargachhi, in the Murshidabad district. He served the orphan boys as manifestations of God.

In 1934, after the passing away of Swami Shivananda, Swami Akhandananda became the President of Ramakrishna Math and Mission. From that time he divided his time between Belur Math and Sargachhi. He participated in the celebration of the Birth Centenary of Sri Ramakrishna in 1936. Owing to old-age ailments he became weak. He passed away on 7 February 1937.

For further reading:
God Lived with Them by Swami Chetanananda