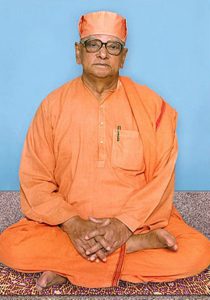 Swami Atmasthananda, the fifteenth President of the Ramakrishna Math and Ramakrishna Mission, was born in May 1919 at Sabajpur, near Dhaka (now in Bangladesh). His pre-monastic name was Satyakrishna. He was a student of the Ramakrishna Mission Calcutta Students’ Home, now located at Belgharia. While a student, he came in contact with many luminaries of the Order including Swami Nirvedananda (a disciple of Swami Brahmananda and the founder of the Students’ Home) and Swami Achalananda.

Satyakrishna received his spiritual initiation from Swami Vijnanananda, a direct disciple of Sri Ramakrishna. He received the brahmacharya vows in 1945 and sannyasa in 1949 from Swami Virajananda. After serving the Order at the Belur Math, Deoghar Vidyapith, Ranchi T.B. Sanatorium and Mayavati Advaita Ashrama, Swami Atmasthananda got the opportunity to serve Swami Virajananda, the then President of the Order, for a long period.

In 1958, Swami Atmasthananda was sent to Rangoon (now Yangon) Sevashrama as its Secretary. Soon, he developed the Sevashrama into one of the best hospitals in Burma (now Myanmar). When the military rulers took over the Rangoon Sevashrama, he returned to India in 1965. He was then sent to Rajkot as its head.

Under the stewardship of Swami Atmasthananda, the Order conducted massive relief and rehabilitation operations in various parts of India, Nepal and Bangladesh. In 1992, he became the General Secretary of the Order. In May 1997, he was made the Vice President of the Ramakrishna Math and Ramakrishna Mission.

As a Vice President, Swami Atmasthananda travelled extensively in various parts of the country and visited many branches of the Order and also some unaffiliated centres. In all these places, he spread the message of Sri Ramakrishna, the Holy Mother Sarada Devi, Swami Vivekananda and Vedanta. He gave spiritual initiation to many aspirants.

After the demise of Swami Gahanananda, Swami Atmasthananda succeeded to the Presidency of the Order, on 3 December 2007. He passed away on 18 June 2017.