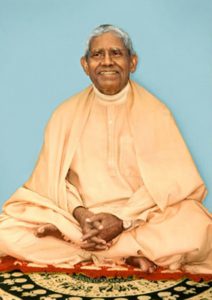 Swami Bhuteshananda, the twelfth President of the Ramakrishna Order, was born on 8 September 1901 at Somsar in Bankura district of West Bengal. His pre-monastic name was Vijay Chandra Roy. His parents were Purna Chandra Roy and Charubala Devi. As a student in Kolkata, he met Brahmachari Jnan Maharaj, a disciple of Swami Vivekananda. Under his guidance, he along with a group of other young boys started frequenting the Belur Math and met many of the direct disciples of Sri Ramakrishna.

In 1921, Swami Saradananda initiated Vijay with Mantradiksha. He was bestowed with the vows of brahmacharya by Swami Shivananda on 30 December 1923 and was named ‘Priyachaitanya’. Swami Gambhirananda was among the others who were initiated into brahmacharya on the same day. He served at the Belur Math in the temple of Sri Ramakrishna and got scriptural lessons from a pandit. For some time he served Mahapurush Maharaj also. On 23 February 1928, Swami Shivananda initiated him into sannyasa.

Thereafter, Swami Bhuteshananda set out for tapasya and spent about two years in the Himalayas. On his return, he was sent to the Dhaka Centre where he served till 1932. Then he went to Mysore to join the study circle for studying scriptures. There he taught his brother-monks the Brahmasutra.

In 1936, Swami Bhuteshananda was made the head of the centre at Shillong. There he got the opportunity to serve the hill-tribes. In 1945, he was made the head of the Rajkot Math. During his tenure there, the ashrama thrived remarkably. He took much pain for getting the Ramakrishna-Vivekananda literature translated into Gujarati. He rendered untiring service in the relief operations organized by the Order in the flooded areas of West Bengal in 1926, as the Camp-in-charge of the Burma Evacuee Relief in 1942 and many others.

Though Swami Bhuteshananda was an extraordinary scholar and could speak untiringly on scriptural subjects, yet he did not author a book. However, his class lectures were transcribed and brought out as books which are very popular for the lucid expositions of profound thoughts.

During the long period of twenty-three years as the Vice President and also as the President of the Order, he travelled to many countries including Singapore, Fiji, Japan, Australia, America, Canada, England, France, Bangladesh and Sri Lanka. He carried the ideals and ideas of the Ramakrishna-Vivekananda Movement to innumerable people.

Swami Bhuteshananda was austere yet jovial in nature. His extraordinary scholarship, simplicity and humanity made him an extraordinary monk. He was easily approachable and had motherly affection towards all. His erudition and total surrender to the Supreme Will were deeply ingrained in him and never were manifested externally, except under compelling situations. His personality beamed with universal love. He left his mortal body for his heavenly abode on 10 August 1998 at the age of 97.