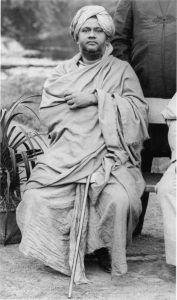 Swami Brahmananda, the first President of the Ramakrishna Math and Ramakrishna Mission, was born on Tuesday, 21 October 1863 at the village Sikra-Kulingram in North 24 Parganas district of West Bengal. His pre-monastic name was Rakhal Chandra Ghosh. His father Anandamohan Ghosh was the landlord of that village and practised law at Kolkata. His mother was Kailashkamini Devi. From his early childhood Rakhal was in-drawn by nature. He was brought to Kolkata for pursuing his high school studies. Eventually he became a close friend of Narendranath Dutta, later known as Swami Vivekananda.

Swami Brahmananda contributed immensely towards spreading the message of the Ramakrishna Order throughout the world. Discipline by means of spiritual growth was his style of functioning. He was a ‘spiritual dynamo’. Whosever came in contact with him could feel tangibly his electrifying spirituality.

He was practical and capable of dynamic administration. Many of the guidelines in the Ramakrishna Order that are followed till date in terms of administration, accounts, relief services, philosophical orientation etc. were formulated by him. Under his able stewardship the Order attained remarkable progress. Swami Brahmananda founded a Centre at Bhubaneshwar which bears the unmistakable signs of his genius. He entered into ‘Mahasamadhi’ on 10 April 1922 in Kolkata at the age of 60.