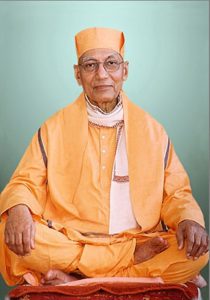 Swami Gahanananda, the fourteenth President of the Ramakrishna Order, was born in October 1916 at Paharpur village of Sylhet district (now in Bangladesh). His pre-monastic name was Naresh Ranjan Roy Choudhury. Naresh was greatly influenced by the dedicated lives of some of the monks of the Ramakrishna Order, especially Swami Prabhananda (Ketaki Maharaj), who was his cousin in his pre-monastic life. He also had an opportunity to meet Swami Abhedananda, a direct disciple of Sri Ramakrishna.

His desire for joining the Ramakrishna Order of monks was enhanced by his contact with Swami Vamadevananda of the Ramakrishna Mission Institute of Culture. In January 1939, at the age of 22, Naresh joined the Order at its centre in Bhubaneswar. He received mantradiksha in 1939, brahmacharya on 25 February 1944 and sannyasa on 12 March 1948 – all from Swami Virajananda. While at Bhubaneswar, he had opportunities to serve some of the spiritual stalwarts of the Order, including Swami Achalananda (a disciple of Swamiji popularly known as Kedar Baba), Swami Shankarananda and others.

Swami Gahanananda, popularly known as Naresh Maharaj, served at the Advaita Ashrama at Kolkata as its Manager, from 1942 to 1952. Then he served at the Shillong Centre from 1953 to 1958. He had also served for a brief period of eight months at Bagerhat (now in Bangladesh) since June 1952. When at Shillong, he had organized flood relief operations in Assam, for a couple of times. For his dedicated service he was very much respected by the tribal inhabitants in and around Shillong.

For his keen interest in service of the suffering people, Swami Gahanananda was sent to the Ramakrishna Mission Seva Pratisthan, Kolkata, in 1958. There he served for the first five years as its Assistant Secretary under Swami Dayananda and then as its Secretary for 22 years. He worked tirelessly to develop the services of Seva Pratisthan to cater to the medical needs of as many people belonging to poor and low-income group as possible. He converted the original small maternity hospital into a huge modern and 550-bedded well-equipped hospital.

As the Vice President, Swami Gahanananda travelled extensively in various parts of the country and visited many branches of the Order. He also visited at different times various places in USA, Canada, England, France, Switzerland, Holland, Russia, Australia, Japan, Myanmar, Sri Lanka, Bangladesh, Singapore, Malaysia and Mauritius to spread the message of Vedanta and of Ramakrishna-Vedanta Movement. In 1993, he represented the Ramakrishna Order at the commemorative function at Chicago, which was attended by 6500 people from all parts of the world, to celebrate the centenary of Swami Vivekananda’s historic appearance at the World Parliament of Religions.

Swami Gahanananda was known for his composed character. He never lost his cool even in adverse and unwelcoming situations. His compassion for all and his relentless service to the afflicted people were exemplary. He used to perform incessant japa inwardly without any external manifestation. One of his greatest contributions towards actualizing the ideal of the Movement was organizing the non-affiliated centres, engaged in spreading the message of Ramakrishna-Vivekananda, under one umbrella institution called the Ramakrishna-Vivekananda Bhava Prachar Parisad, guided by the Belur Math. Thus, he integrated these centres in the mainstream and streamlined their activities.