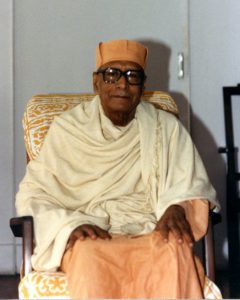 Swami Gambhirananda, the eleventh President of the Ramakrishna Math and Ramakrishna Mission, was born on 11 February 1899 at Sadhuhati in the district of Sylhet (now in Bangaladesh). His pre-monastic name was Jatindranath Dutta. His parents were Dinanath Dutta and Tarasundari Devi. After completing his education, Jatindranath joined the army as an Accounts Officer. While a student, he was greatly influenced by Swami Jagadananda, a disciple of the Holy Mother, who was Jatindranath’s teacher. His teacher’s influence made him read the Works of Swamiji and that brought change in him. Consequently, he quit his job in the army to join the Ramakrishna Order.

He came to the Belur Math in March 1923 and met Swami Shivananda. At his behest, Jatindra joined the Order at the Ramakrishna Mission Vidyapith, Deoghar, where he subsequently became the Principal of the School. In December 1923, he received his brahmacharya vows and spiritual initiation from Swami Shivananda. After brahmacharya, Jatindra was named Brahmachari Soumyachaitanya. He assumed the charge of the Secretary of the Vidyapith in Deoghar while he was still a brahmachari. He took the monastic vows from his ‘guru’, Swami Shivananda in 1928. Because of his profound and indrawn nature, Gambhirananda was popularly known as Gambhir Maharaj.

After serving the Order at Udbodhan (Bagbazar in Kolkata) Swami Gambhirananda was sent to the Sri Ramakrishna Advaita Ashrama at Varanasi where he studied the main texts of the Advaita Vedanta from the traditional scholars. Between 1942 and 1944, Swami Gambhirananda served as the editor of the English journal, Prabuddha Bharata Mayavati. Since 1936, he was a member of the Working Committee.

In 1947, he became a Trustee of the Ramakrishna Math and a member of the Governing Body of the Ramakrishna Mission. He joined at the Belur Math as an Assistant Secretary and served the Order in that capacity till 1953. Then he was made the in-charge of the Advaita Ashrama at Mayavati. During his tenure at Mayavati, the ashrama made rapid progress.

Swami Gambhirananda had profound knowledge of the scriptures. He had many books to his credit. He had translated the main Upanisads in Bengali. Moreover he had translated eight Upanisads in English, with the commentaries of Sankaracharya. He had also translated the Brihadaranyaka Upanisad and the Bhagavad Gita, with the commentaries of Sankaracharya as well as with Madhusudan Sarasvati’s annotation on the Gita. However, his actual credit lay in composing authentic biographies of the Holy Mother and Swami Vivekananda in Bengali which were brought out during their birth centenaries. The compilation of the biographies of the direct disciples of Sri Ramakrishna named in Bengali, was one of his first gifts to the Ramakrishna Movement.

Decisiveness, punctuality and orderliness were the hallmark of his personality. The striking feature of his character was his utmost sincerity in every dealing, yet remaining unattached, as the ideal of Karma-Yoga demands. He was open-minded and strict in his principles. Swami Gambhirananda passed away on 27 December 1988 at the ripe age of almost 90 years.