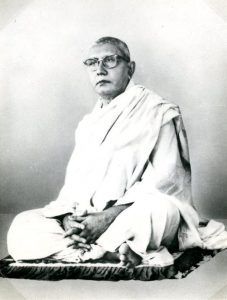 Swami Madhavananda, the ninth President of the Ramakrishna Math and Ramakrishna Mission, was born on Saturday, 15 December 1888 at Baghanchra in Nadia district of West Bengal. His pre-monastic name was Nirmal Chandra Basu. His father was Hariprasad Basu. He was a brilliant student and did his graduation from the University of Calcutta with distinctions.

During his student life he read the works of Swami Vivekananda and was inspired by the ideals and message of Sri Ramakrishna and Swamiji. He was initiated by the Holy Mother at Jayrambati in March 1909. The Holy Mother considered him to be as commendable as ‘the elephant’s tusk covered with gold’. He joined the monastery at Chennai in January 1910. He was initiated into sannyasa by Swami Brahmananda in January 1916. Later, his younger brother Vimal also joined the Order and came to be known as Swami Dayananda.

Swami Madhavananda spent a few years at the Udbodhan office assisting in the publication of the journal. He was later sent to Mayavati as the head of the Advaita Ashrama. He made several improvements there and started a Hindi organ of the Order called ‘Samanvaya’, with the assistance of the renowned Hindi poet, Suryakant Tripathi ‘Nirala’. He was instrumental in spreading the ideals of Sri Ramakrishna-Swami Vivekananda in Gujarat and also in founding the Rajkot Centre. He was sent to the USA for preaching Vedanta at the San Francisco monastery.

Swami Madhavananda became a Trustee of the Ramakrishna Math and a member of the Governing Body of the Ramakrishna Mission, in 1922. He was called back to India in 1929, for serving as a Joint Secretary of the Order. He took the charge of the General Secretary in May 1938 and continued working in that capacity till he was made a Vice President in March 1962. Till date, his tenure as the General Secretary is the longest one.

Swami Madhavananda was austere by nature and used to practise japa and meditation for long hours despite his rigorous work schedule. He was very well-versed in scriptures and translated many scriptures like the Brihadaranyaka Upanishad, Brahmasutra, Bhasha Paricchheda, etc. His adherence to principles, able administration, scholarship and loving disposition made him a legendary monk of the Order. More remarkable were his poise and forbearance.