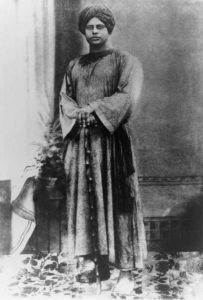 Born in a middle class family, Niranjan came under the influence of a group of occultists when he was a teenager, and it was in their company that he first visited Sri Ramakrishna at Dakshineswar. The Master took Niranjan aside, and cautioned him about the dangers of occult practices. Niranjan followed the Master’s advice and began to practise meditation under the direction of Sri Ramakrishna.

During the Master’s last illness Niranjan served the Master with unflinching devotion. After the Master’s passing, when the new monastic brotherhood was formed at Baranagar, Niranjan joined it and after sannyasa assumed the name Niranjanananda. After staying at the Math for three years, he went on pilgrimage to different places in India, and also visited Sri Lanka.
Swami Niranjanananda was very much devoted to Holy Mother Sri Sarada Devi. Towards the end of his life he went to Hardwar for tapasya. There he had a severe attack of dysentery and passed away on 9 May 1904.