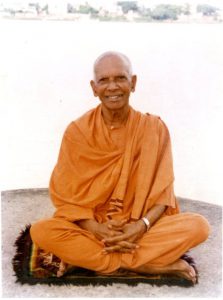 Swami Ranganathananda, the thirteenth President of the Ramakrishna Math and Ramakrishna Mission, was born on 15 December 1908 at Trikkur village near Trichur in Kerala. His pre-monastic name was Shankaran Kutty. His parents were Neelakantha Sastri and Lakshmi Kutty Amma. Young Shankaran was deeply inspired by the teachings of Sri Ramakrishna and Swami Vivekananda. Consequently, he joined the Mysore Centre in 1926.

He served at the Mysore Centre and also the Bangalore Centre for more than a decade, under Swami Siddheswarananda. Swami Shivananda gave him the spiritual initiation on 30 June 1926. Shankaran received his brahmacharya vows on 23 March 1929 and sannyasa on 23 January 1933, both from Swami Shivananda.

Swami Ranganathananda served as the Secretary and the Librarian at the Rangoon Centre, between 1939 and 1942. After the bombing of Rangoon during the Second World War, Maharaj left for India on foot along with other Indian evacuees from Burma. After his return, he served as the head of the Karachi Centre, from 1942 to 1948, until the partition of India. The Mission found it difficult to continue its activities at Karachi after the partition and so it had been closed. The Swami served as the Secretary at the Delhi Centre, from 1949 to 1962. His classes on scriptures at Karachi and later at Delhi were immensely popular and were attended by many distinguished personalities.

Swami Ranganathananda served as the Secretary of the Ramakrishna Mission Institute of Culture, Kolkata, the Director of School of Humanistic and Cultural Studies and also the Editor of the Institute’s journal. In 1973, he became the head of the Hyderabad Centre where he founded the Vivekananda Vani School of Languages, a temple and a library. He used to deliver spiritual discourses regularly.

Swami Ranganathananda was chosen by the Government of India for the Padma-Vibhushan Award in 2000, but being wholly dedicated to the cause of the Order, he declined the honour as it was conferred on him in his individual capacity and not for the Order.

Swami Ranganathananda was regarded as a saint, savant and ‘silver-tongued’ orator. He had authored over 50 books, some of which have been published by noted institutions like the Bharatiya Vidya Bhavan and others, besides the publication centres of the Order.

‘Godward Passion and Manward Love’ was his motto. Swami Ranganathananda stressed on service as a way of life, and Vedanta as a science of religion. His personality was marked by simplicity, profound love for humanity and an attitude of equality to all. Oratorical skills and intellectual inclination marked him out among his peers.

Swami Ranganathananda passed away on Monday, 25 April 2005 at the age of a little over 96. To commemorate the birth centenary of Swami Ranganathananda, the Government of India’s Department of Post released a postage stamp in the denomination of rupees five only, on 15 December 2008, at Kolkata.