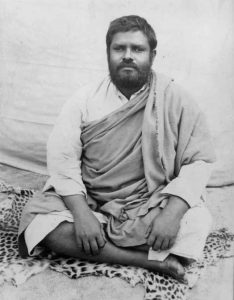 Born in an affluent family, Sharat was always calm and quiet and pious in his boyhood. He joined the medical college with the idea of becoming a doctor, but discontinued his studies in order to serve Sri Ramakrishna. Along with his cousin Shashi (who stayed with Sharat’s family) he joined the Brahmo Samaj, and in 1883 they went together to Dakshineswar. Sri Ramakrishna drew them to him like a powerful magnet. During the Master’s last illness Sharat also, like Shashi, dedicated himself to serving the Master day and night.

After the Master’s passing, Sharat joined the Baranagar monastery and took the vows of sannyasa assuming the name Swami Saradananda. After spending a few years in pilgrimage and tapasya along with his brother monks, he returned to Baranagar Math in 1891. When Swami Vivekananda started extensive preaching work in the West, and felt the need for another brother monk to assist him, Swami Saradananda was brought to the United States in 1896. His calm and gentle disposition, courteous and loving manners and able exposition of Vedanta won him many friends and admirers in America.

But Swami Vivekananda, who founded the Ramakrishna Mission soon after his return to India in 1897, saw that a highly capable person like Saradananda was necessary to manage the affairs of the Math and the Mission. So Saradananda was called back to Kolkata and made the General Secretary of Ramakrishna Math and the Mission, a post which he held for nearly three decades till the end of his life. By his mature wisdom, clear thinking, strength of mind and devotion to Sri Ramakrishna and Holy Mother, he guided the course of the twin organizations in those formative years when political agitation against the British rule was gaining momentum in India.

Apart from his important work as General Secretary, Swami Saradananda is remembered for several other types of great service that he rendered. The first one was his taking over the Udbodhan, the Bengali journal of Ramakrishna Math and Mission, as its editor and publisher in 1902 when Swami Trigunatitananda left for America. The second one was taking upon himself the full responsibility of looking after the needs of the Holy Mother whether she stayed in Jayrambati or Kolkata. His third work was writing the monumental biography of Sri Ramakrishna known as Sri Ramakrishna Lila Prasanga in Bengali (translated later into English under the title Sri Ramakrishna the Great Master). His last great work was the construction of the temple dedicated to Holy Mother in 1921 on the spot where her sacred body was cremated in Belur Math, and another temple at Mother’s birthplace in Jayrambati in 1923.

He was loved and respected by hundreds of people. He was a great support especially to women. In the first week of August 1927 he suffered a stroke. Two weeks later on 19 August 1927, he breathed his last.

For further reading:
God Lived with Them by Swami Chetanananda.