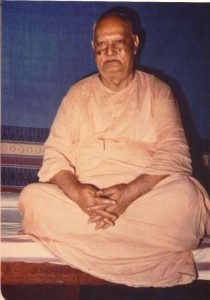 Swami Shankarananda, the seventh President of the Ramakrishna Math and Ramakrishna Mission, was born on Tuesday, 9 March 1880 at his material uncle’s house at Baje Pratappur in Hooghly district of West Bengal. His pre-monastic name was Amritalal Sengupta. His father Navinkrishna Sengupta was an engineer. Due to his posting at various places, Amritalal had to move about frequently, with the family. Swami Sadananda, the first monastic disciple of Swamiji, was his distantly related maternal uncle in his pre-monastic life.

As a child Amritalal had a glimpse of Swami Vivekananda after his return from the West. From his childhood, Amritalal was very energetic, yet possessed a gentle disposition. His gentleness developed remarkably in his monastic life. He left home in 1902 and joined at the Belur Math. He was initiated by Swami Brahmananda who had developed great liking for the boy and fondly called him Amulya, meaning ‘precious’. Eventually, he became popular as Amulya Maharaj.

Amulya was initiated into sannyasa by Swami Brahmananda in 1906. He served his guru as his attendant. He moulded his life under the active guidance of Swami Brahmananda. Amulya’s visits to various places in India with Sister Nivedita and a visit to Japan with Swami Sadananda, helped him to gather educative experiences related to culture, religion and architecture. He was instrumental in building the monastery at Bhubaneswar, under the guidance of Swami Brahmananda. Many important temples like the temples of the Holy Mother and Swami Brahmananda were later built under his supervision. Swami Shankarananda was austere and meditative by nature and took up spiritual discipline at places like Darjeeling, Bhubaneswar, Puri and other places.

After the passing away of Swami Virajananda, the mantle of the office of Presidentship fell on Swami Shankarananda on 19 June 1951. He was a man of few words and outwardly maintained a stern appearance, but had motherly love and concern for all. His tenure as the President of the Order was marked by the consolidation of the Ramakrishna Movement in various parts of the country.

During the Presidentship of Swami Shankarananda many outstanding achievements took place like the establishment of the independent monastic Order for the nuns, known as the Sarada Math, and the Birth Centenary Celebration of the Holy Mother was conducted successfully. Moreover, the Seminary for the novice monks called the Probationers’ Training Centre was founded under him, at the Belur Math. On Saturday, 13 January 1962, Swami Shankarananda entered into ‘Mahasamadhi’ at the Belur Math, at the ripe age of nearly 82.