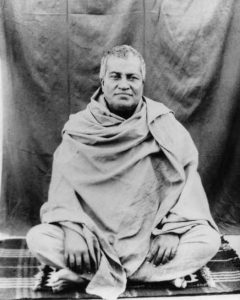 Swami Shivananda, the second President of the Ramakrishna Math and Ramakrishna Mission, was born on Saturday, 16 December 1854, at Barasat in North 24 Parganas district of West Bengal. His pre-monastic name was Taraknath Ghosal. His father was Ramkanai Ghosal, a tantrik sadhaka and his mother was Vamasundari Devi. His father had been acquainted with Sri Ramakrishna, because he was the solicitor of Rani Rasmani’s estate. From his early childhood, Taraknath had a spiritual inclination and always aspired for attaining ‘samadhi’ although he did not know the exact implication of ‘samadhi’. Due to family constraints he had to marry but never consummated the marriage. Acknowledging his perfect control over lust, Swami Vivekananda used to call him ‘Mahapurush’, meaning a great soul, and this later became his popular name. He first met Sri Ramakrishna probably in May or June of 1880. He heard the Master speak on ‘samadhi’ and also that he used to enter into that ecstatic state himself. Taraknath was convinced that he could also attain ‘samadhi’ if he got the spiritual guidance from the Master.

After the death of his wife, Taraknath gave up his job and left home for practising ‘sadhana’ under the spiritual guidance of Sri Ramakrishna. He was much fascinated by the life and teachings of Buddha and moulded himself accordingly. When he visited Bodhgaya along with others, he had some visions of Buddha. Sri Ramakrishna once commented that Taraknath belonged to a high state of divine power ‘shakti’ from where ‘nama-rupa’ originates. After the passing away of the Master, a monastery was founded at Baranagore in October 1886. Taraknath was among the first inmates of that monastery. In January 1887, he took the vows of ‘sannyasa’ and was renamed as Swami Shivananda. Since then he engaged himself in practising austerity at various places in the Himalayas and other places of pilgrimage. During this phase, he also spread the message of Sri Ramakrishna and Vedanta in South India and Sri Lanka.

When the Ramakrishna Mission was founded by Swami Vivekananda in 1897, Swami Shivananda dedicated himself to its cause. He was one of the active workers in the Plague Relief organized by the Mission in 1899, landslide relief and other service activities. In 1902, he was sent to Varanasi for organizing an ashrama. He started the Ramakrishna Advaita Ashrama at Varanasi and stayed there as the head of it, till 1907. After that, he joined at the monastery at Belur. Later he helped in establishing another ashrama at Almora, in deference to Swami Vivekananda’s wish.

Swami Shivananda, popularly known as Mahapurush Maharaj, became the Vice President of the Order on 25 August 1910. After the demise of Swami Brahmananda, he became the President of the Order, in May 1922. He toured extensively through various parts of India, initiated innumerable disciples and consolidated and expanded the organization. The remarkable features of his character were his childlike simplicity, unshaken faith in God and overflowing love for all. In many respects he was compared with Shiva. His faith in God remained unshaken even amidst trials and tribulations. In 1933, he had a stroke of thrombosis and remained in a paralytic condition till he passed away on 20 February 1934, at the ripe age of 80.