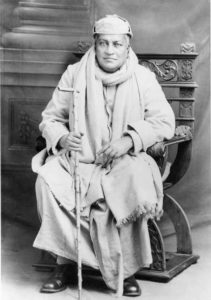 Tarak was the second son of his father Ramkanai Ghoshal who was a lawyer and Tantrik adept and also very charitable. In accordance with the custom of those days Tarak was married in his teens but, with the consent of his young wife, he lived an absolutely chaste life. Years later, when Swami Vivekananda came to know of this, he called him ‘Mahapurush’ which meant ‘great soul’, and since then he came to be known as ‘Mahapurush Maharaj’.

After completing school final, Tarak took up a job in order to help his father. But he used to practise spiritual disciplines. He saw Sri Ramakrishna for the first time at the house of Ramachandra Datta in May 1880. A few days later he went to Dakshineswar and surrendered himself fully to Sri Ramakrishna. From then on he began to practise intense prayer and meditation under the Master’s guidance. Three years later his wife died; Tarak renounced hearth and home and started living sometimes in a devotee’s house and sometimes in lonely places.

After the Master’s mahasamadhi, when Baranagar Math was started, Tarak was one of the first to join the brotherhood. With sannyasa ordination he received the name Shivananda. He, however, spent several years leading an intensely contemplative life at different places in north India, and returned to Math in 1896.

When Swami Vivekananda founded the Ramakrishna Mission in 1897, he sent Swami Shivananda to Ceylon (now Sri Lanka) to spread Vedanta there. A year later Swami Shivananda returned to Math. In 1902, just before Swami Vivekananda’s mahasamadhi, he went to Varanasi to start the Advaita Ashrama there of which he remained the head for seven years. In 1910 he was elected Vice-President of Ramakrishna Mission. In 1922, after the passing of Swami Brahmananda, he became the second President of Ramakrishna Math and Mission. He travelled to different places blessing sincere seekers with spiritual initiation. Like Swami Brahmananda, he stressed meditation along with work. He gave great importance to prayer as a form of Sadhana. He was full of love and compassion, and sincere seekers flocked to him.

In April 1933 he suffered a stroke and developed paralysis of one side. On 20 February 1934, a few days after Sri Ramakrishna’s birthday, Mahapurush Maharaj left the body for the heavenly abode. His memory is kept alive at Belur Math in the small room adjacent to the Old Shrine.