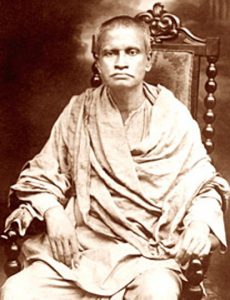 Swami Shuddhananda, the fifth President of the Ramakrishna Math and Ramakrishna Mission was born in October 1872, in Kolkata. His pre-monastic name was Sudhir Chandra Chakraborty. His father was Ashutosh Chakraborty. Though of frail health, he had a spiritual inclination since his childhood. He, along with some of his friends, used to visit the Baranagore Math. Moreover, he was close to some of the householder disciples of Sri Ramakrishna.

When Swami Vivekananda returned from the West in 1897, Sudhir met him and decided to join the Order in April 1897. He was initiated by Swami Vivekananda in May 1897. Finding him intelligent and proficient in scriptures, Swamiji blessed him, saying, ‘You will become a wise man’. This came true in later years when he was considered to be an authority in Sanskrit scriptures as well as in the ideals of Swami Vivekananda.

On 7 May 1903, Swami Shuddhananda was appointed a Trustee of the Ramakrishna Math and a member of the Governing Body of the Ramakrishna Mission. Moreover, he was made a Joint Secretary (now called the Assistant Secretary) of the Order. He also took up as the editor of the Bengali organ of the Order, Udbodhan, for some time. He contributed many scholarly articles in the journal. He was an untiring worker, strict disciplinarian and principled administrator, yet in the heart of hearts he was an all-renouncing monk.

In 1927, he was made the Secretary (now called the General Secretary) and continued in that post till 1934. After that, he went for tapasya. During his tenure as the Secretary, he had to face many crises but remained composed and firm in principle. In 1937, Swami Shuddhananda became the Vice President of the Order. After the ‘Mahasamadhi’ of Swami Vijnanananda, Swami Shuddhananda took the onus of Presidentship, on 18 May 1938. His tenure as the President of the Order was very short as he passed away on 23 October 1938, at the age of 66.