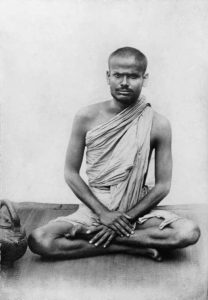 Born in an affluent family, Subodh was spiritually inclined from boyhood. While studying in class eight he heard about Sri Ramakrishna from his father who was a follower of Brahmo Samaj. One day in 1884 Subodh walked all the way to Dakshineswar in the company of a friend. Sri Ramakrishna received them with great love. After that Subodh went to the Master several times. Owing to the opposition of his parents, he could not stay with Sri Ramakrishna or serve him during his last illness. But the Master understood his difficulty and made him his own through his boundless love.

He joined the Baranagar Math and was ordained a sannyasin bearing the name Subodhananda. Since he was only nineteen and the youngest of the group, he was endearingly called ‘Khoka’ (which means ‘child’) by Swamiji and other monastic brothers. He spent several years travelling in different parts of India performing tapasya. After Swami Vivekananda’s return from the West when Belur Math monastery was established, he felt himself quite at home there. He visited East Bengal (now Bangladesh) twice and inspired many people with his talks and loving conduct. All through his life he combined in himself the simplicity of a child and the wisdom of an illumined soul. He passed away in Belur Math on 2 December 1932.