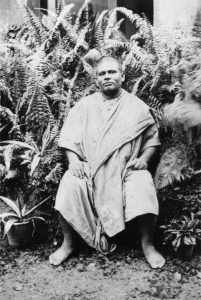 Born in an aristocratic family, Sarada studied in the school of which Mahendranath Gupta (popularly known as M.) was the headmaster. After Sarada passed the school final examination, M. one day took him to Sri Ramakrishna. Owing to his parents’ opposition Sarada could not visit the Master frequently.

When the Baranagar Math was established, Sarada joined it and underwent sannyasa ordination assuming the name, Swami Trigunatitananda. He spent a few years visiting the holy places and doing tapasya. He was endowed with strong physique and indomitable courage. In 1896, at the behest of Swami Vivekananda, he bought a press and started the monthly journal Udbodhan in a rented room. This is the first journal of the Ramakrishna Order and is the oldest surviving religious journal of its kind in India. After Swami Yogananda’s passing away, he served the Holy Mother for three years until he left for America.

At the behest of Swami Vivekananda he went to America in 1902 and took charge of the San Francisco centre. His holy life, selfless love and unmistakable marks of spirituality attracted a large number of students and disciples. He was, however, a strict disciplinarian. One of his main achievements in San Francisco was the construction of a new building for the centre. Incorporating certain unique architectural features, this building, known as ‘Hindu Temple’, still stands as a monument to the eternal truths of Vedanta and the immortal spirit of man.

One day when he was conducting a spiritual discourse, a former student of his who had become mentally deranged, threw a crude bomb at him, killing himself and seriously wounding Swami Trigunatitananda. The Swami remained calm and enquired about the student. However, he finally succumbed to the injuries on 10 January 1915.