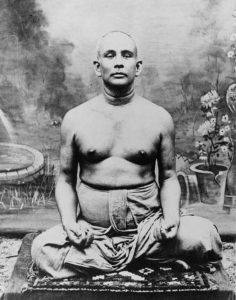 Born in a well-to-do family, Hari lost his parents in boyhood and grew up under the care of his eldest brother. After passing the school final examination he did not go to college. Instead, he devoted his time to meditation and the study of Sankara’s Advaita Vedanta. When he was about 17 years old he visited Sri Ramakrishna at Dakshineswar for the first time, and after that he started going to the Master frequently. The Master regarded him as a yogi. Hari was a member of the team of youngsters who served Sri Ramakrishna during his last illness at Cossipore.

After the Master’s passing, Hari joined Baranagar Math and underwent sannyasa ordination assuming the name Turiyananda. After three years he left the monastery and spent his time doing tapasya at different places, sometimes alone, sometimes in the company of his brother monks. When Swami Vivekananda went to the West for the second time, he took Swami Turiyananda with him. When Swamiji went back to India, Turiyananda continued his work first in New York and Boston and later in California. However, his health deteriorated and he left America in June 1902.

On his arrival in India, he was shocked to hear of the passing of Swami Vivekananda. Turiyananda spent the next several years practicing intense contemplation in Vrindavan, in different places in the Himalayas, in Dehra Dun, Kankhal, Almora, etc. He finally settled down in Varanasi in February 1919. During the last few years he suffered much from diabetes. He passed away on 21 July 1922 repeating Upanishadic Mantras.