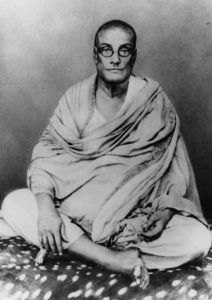 Swami Vijnanananda, the fourth President of the Ramakrishna Math and Ramakrishna Mission, was born on Friday, 30 October 1868 at Etawah in Uttar Pradesh where his father Taraknath Chattopadhyay was working in the Commissariat of the British Government. His pre-monastic name was Hariprasanna Chattopadhyay. After the untimely death of his father, Hariprasanna came back to their ancestral house at Belgharia in North 24 Parganas district of West Bengal along with his mother Nakuleshwari Devi and family.

He was a young boy when he first had a glimpse of Sri Ramakrishna on 15 June 1879. But his regular contact with the Master began from 15 September 1883 when he visited him at Dakshineswar with some of his friends. Sri Ramakrishna jokingly wrestled with him that day and later recalled that Hariprasanna (or Peshan as he used to call) was ‘guileless’ and that he was an incarnation of Jambavan who had wrestled with Sri Krishna.

Hariprasanna became a civil engineer and worked under the Government of Uttar Pradesh. However, his monastic inclination brought him to the Alambazar Math in 1898. He took the monastic vows on 9 August 1899 and was named Swami Vijnanananda. After spending a few years with Swami Vivekananda and at the monastery, he settled himself at the Allahabad Centre. He led a very austere life and it is said that he had many mystic experiences and spiritual visions.

He was entrusted by Swami Vivekananda for building the monastery at Belur which he accomplished successfully. Moreover, he was associated with the construction work in many centres like the Homes of Service at Varanasi, Kankhal and other places. He was appointed a Trustee of the Ramakrishna Math and a member of the Governing Body of the Ramakrishna Mission and also the Vice President of the Order in 1934. Later, after the demise of Swami Shivananda he became the fourth President of the Order on 5 March 1937.