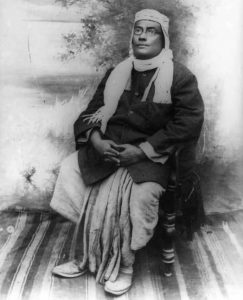 Hari Prasanna had the good fortune to see Sri Ramakrishna when he was a small boy. He met the Master when he was studying at St. Xavier’s College where Sharat (later, Swami Saradananda) was his classmate. During the first meeting Sharat was with him. Later he visited the Master alone several times. Sri Ramakrishna gave him important instructions regarding spiritual life and blessed him in several ways.

After completing his studies in Kolkata, Hari Prasanna went to Bankimpur in Bihar and entered Patna College to study for BA degree. There he learned about the passing away of Sri Ramakrishna and also saw him in a vision. After graduation he went to Poona College of Science to study Civil Engineering. After receiving his engineering degree in 1892 he got the job of district engineer at Gazipur. However, the fire of renunciation which Sri Ramakrishna had lighted in him, was burning, and he finally renounced the world in 1896 and joined the Alambazar Math where the disciples of Sri Ramakrishna were staying.

When the Belur Math property was purchased, Hari Prasanna’s knowledge of engineering proved to be a great asset. His first task was to remodel the existing building and build new ones including the shrine. The consecration of the new premises took place on 9 December 1898. Another major work he executed at Belur Math was the construction of a strong embankment on the bank of the Ganga in front of the main building. Another most important work that he undertook was the preparation of a plan for a new temple of Sri Ramakrishna based on the ideas given by Swami Vivekananda and supervising its construction. On 9 May 1899 Hari Prasanna formally took sannyasa and assumed the name Vijnanananda.

Swami Vivekananda asked Vijnanananda to start a new centre in Allahabad and, accordingly Vijnanananda left Belur Math in 1900. In Allahabad he lived a more or less secluded life, immersed in sadhana, reading and writing. He also went on pilgrimage to many places. On the demise of Swami Akhandananda, the third President of Ramakrishna Math and Mission, Swami Vijnanananda became the next President in March 1937. As President of the Order, Vijnanananda was full of love and compassion and initiated many people into spiritual life. On 14 January 1938, Swami Vijnanananda performed the dedication of the new temple of Sri Ramakrishna at Belur Math. He spent his last days in Allahabad and entered mahasamadhi on 25 April 1938.