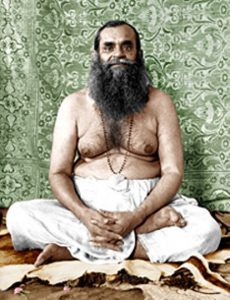 Swami Virajananda, the sixth President of the Ramakrishna Math and Ramakrishna Mission, was born on Tuesday, 10 June 1873, in Kolkata. His pre-monastic name was Kalikrishna Bose. His father Dr. Trailokyanath Bose was the house-physician of Keshab Chandra Sen, the famous Brahmo leader. His mother Nishadkali Devi was a pious lady.

Due to his soft nature and mild disposition, Kalikrishna was loved by all. During his school days, he developed friendship with a group of boys, some of whom later became the monks of the Ramakrishna Order. The group included Sudhir (Shuddhananda), Haripada (Bodhananda), Sushil (Prakashananda), Khagen (Vimalananda) and others.

This group of young boys used to discuss religion, practise spiritual discipline and lead good moral life. They gradually came in touch with the householder disciples of Sri Ramakrishna and later with the monastic disciples. They veered round the Baranagore Math. Consequently, Kalikrishna joined the Math as an ascetic, in the second half of 1891. He was among the first ones to join the Order, after the direct disciples of Sri Ramakrishna.

He was initiated by the Holy Mother Sri Sarada Devi, sometimes in the middle of 1893. He went to various holy places like Varanasi, Vrindavan, etc. for practising spiritual disciplines. After his return from the West, Swami Vivekananda initiated Kalikrishna into sannyasa, on 2 January 1897, at Alambazar. Swami Virajananda served the Order in various forms.