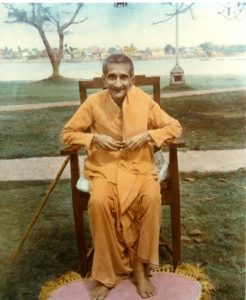 Swami Vireshwarananda, the tenth President of the Ramakrishna Math and Ramakrishna Mission, was born on 31 October 1892 at Chennai. His pre-monastic name was Pandurang Prabhu and so was later known as Prabhu Maharaj. After his father’s death at an early age, his mother moved with them to his maternal uncle’s house at Mangalore. It is said that at the age of 5, Prabhu had the blessings of Swami Vivekananda.

Pandurang Prabhu studied at Madras (Chennai) Law College where he had a chance to read the Complete Works of Swami Vivekananda. He joined at the Belur Math in the first half of 1916 and was initiated by the Holy Mother, in June 1916. He received his monastic vows from Swami Brahmananda on 12 January 1920.

After his initiation into sannyasa, Swami Vireshwarananda stayed at Varanasi. In 1921, he was sent to the Advaita Ashrama at Mayavati as a monastic worker. Later, he became its Manager at Kolkata Office and was made its head in 1927. He became a Trustee of the Ramakrishna Math and a member of the Governing Body of the Ramakrishna Mission, in 1929. He was made one of the Joint Secretaries of the Order on 7 April 1938.

An efficient organizer and able administrator as he was, Swami Vireshwarananda was sent to Varanasi, Orissa, Madras Presidency, Ceylon and other places for organizing the workings of ashramas. In 1942, he finally returned to the Belur Math. When the Indian subcontinent and Asia were passing through a critical period during 1942 to 1947, he had successfully conducted several relief operations.

When Swami Madhavananda took leave from his office of the General Secretary on health ground, Swami Vireshwarananda officiated on his behalf from 1949 to 1951. Later in May 1961, he was made the General Secretary of the Order. After the demise of Swami Madhavananda, he became the President of the Ramakrishna Math and Ramakrishna Mission, on 22 February 1966.

As the President of the Order, Swami Vireshwarananda travelled extensively throughout India for spreading the message of the Ramakrishna-Vivekananda Movement and inspired innumerable persons. His tenure is remarkable for both unprecedented growth and consolidation of the Order.

He introduced many philanthropic activities like rural development, ‘Pallimangal’ and training of youth in self-employment, ‘Janashiksha’, which encouraged the Order to venture into newer fields and thus expand its scope of service. He encouraged in adopting modern means of services for serving the distressed in a better way. His efficiency and administrative capabilities made him a legendary monk of the Order.

Though Swami Vireshwarananda had to be thoroughly engaged in administrative work, he could find time for reading extensively. His scholarship is evident in his translation in English of many Sanskrit scriptures that include the gloss of Sridhara on the Bhagavadgita, the commentaries of Sankara and Ramanuja on Brahmasutra. His lectures and articles bear the impress of his brilliance. His discourses provide practical instructions and inspire one to follow the ideals of the Ramakrishna-Vivekananda Movement.

The rare features of his personality made innumerable people his admirers. He served the Order as the President for a very long period till he passed away on 13 March 1985. He had left an indelible mark on the Ramakrishna Movement.