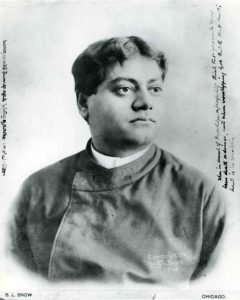 Swami Vivekananda was born in Calcutta on 12th January 1863. The name of his family was Datta, and his parents gave him the name Narendranath; Naren for short.

When Naren was in his middle teens, he started going to college in Calcutta. He was a good-looking, athletic youth and extremely intelligent. He was also a fine singer and could play several musical instruments. Already, he showed a great power for leadership among the boys of his own age. His teachers felt sure that he was destined to make a mark on life.

In November 1881, he was invited to sing at a house where Ramakrishna was a guest. They had a brief conversation and Ramakrishna invited the young man to come and visit him at the Dakshineswar Temple, on the Ganga a few miles outside Calcutta, where he lived.

From the first, Naren was intrigued and puzzled by Ramakrishna’s personality. He had never met anyone quite like this slender, bearded man in his middle forties who had the innocent directness of a child. He had about him an air of intense delight, and he was perpetually crying aloud or bursting into song to express his joy, his joy in God, the Mother Kali, who evidently existed for him as live presence. Ramakrishna’s talk was a blend of philosophical subtlety and homely parable. He spoke with a slight stammer, in the dialect of his native Bengal village, and sometimes used coarse farmyard words with the simple frankness of a peasant.

For Ramakrishna, in his almost unimaginably high state of spiritual consciousness, Samadhi was a daily experience, and the awareness of God’s presence never left him. Vivekananda recalls that, “I crept near him and asked him the question I had been asking others all my life: ‘Do you believe in God, sir?’ ‘Yes,’ he replied. ‘Can you prove it, sir?’ ‘Yes.’ ‘How?’ ‘Because I see Him just as I see you here, only much more intensely.’ That impressed me at once. For the first time, I found a man who dared to say that he saw God, that religion was a reality – to be felt, to be sensed in an infinitely more intense way than we can sense the world.”

After this, Naren became a frequent visitor to Dakshineswar. He found himself gradually drawn into the circle of youthful disciples – most of them about his own age – whom Ramakrishna was training to follow the monastic life.

In 1885 Ramakrishna developed cancer of the throat. As it became increasingly evident that their Master would not be with them much longer, the young disciples drew more and more closely together. Naren was their leader.

On 15th August 1886, Ramakrishna uttered the name of Kali in clear ringing voice and passed into final Samadhi.

The boys felt that they must hold together, and a devotee found them a house at Baranagore, about halfway between Calcutta and Dakshineswar, which they could use for their monastery.

But gradually the boys became restless for the life of the wandering monk. With staff and begging bowl, they wandered all over India, visiting shrines and places of pilgrimage, preaching, begging, passing months of meditation in lonely huts. Sometimes they were entertained by Rajas or wealthy devotees; much more often, they shared the food of the very poor.

Such experiences were particularly valuable to Naren. During the years 1890-93 he acquired the firsthand knowledge of India.

At the end of May 1893 he sailed from Bombay, via Hong Kong and Japan, to Vancouver; from there he went on by train to Chicago, to join the Parliament of Religions to be held on 11 September, 1893.

This was probably the first time in the history of the world that representatives of all major religions had been brought together in one place, with freedom to express their beliefs. But Swamiji had no formal invitation to join the Parliament as a delegate. But Professor J. H. Wright of Harvard University assured him that he would be welcome at the Parliament even though he had no formal invitation: “To ask you, Swami, for credentials,” the Professor remarked, “is like asking the sun if it has permission to shine.”

When the Parliament opened, on the morning of 11th September, Vivekananda immediately attracted notice as one of the most striking figures seated on the platform, with his splendid robe, yellow turban, and handsome bronze face.

During the afternoon, Vivekananda rose to his feet. In his deep voice, he began, “Sisters and Brothers of America” – and the entire audience, many hundred people, clapped and cheered wildly for two whole minutes. A large gathering has its own strange kind of subconscious telepathy, and this one must have been somehow aware that it was in the presence of that most unusual of all beings, a man whose words express exactly what he is. When Vivekananda said, “Sisters and Brothers”, he actually meant that he regarded the American women and men before him as his sisters and brothers: the well-worn oratorical phrase became simple truth.

As soon as they would let him, the Swami continued his speech. It was quite a short one, pleading for universal tolerance and stressing the common basis of all religions. When it was over, there was more, thunderous applause.

After the closing of the Parliament of Religions, Vivekananda spent nearly two whole years lecturing in various parts of the eastern and central United States.

He met and made an impression on people of a more serious kind-Robert Ingersoll the agnostic, Nikola Tesla the inventor, Madam Calve the singer, and most important of all, he attracted a few students whose interest and enthusiasm were not temporary; who were prepared to dedicate the rest of their lives to the practice of his teaching.

He had a message to the West. He asked his hearers to forsake their materialism and learn from the ancient spirituality of the Hindus. What he was working for was an exchange of values. He recognised great virtues in the West – energy and initiative and courage – which he found lacking among Indians.

In August he sailed for France and England, and preached Vedanta, returning to New York in December. It was then that, at the urgent request of his devotees, he founded the first of the Vedanta Societies in America: the Vedanta Society of New York. (Vedanta means the non-dualistic philosophy which is expounded in the Vedas, the most ancient of Hindu scriptures.)

Vivekananda landed in Ceylon in the middle of January 1897. From there on, his journey to Calcutta was a triumphal progress. His countrymen had followed the accounts of his American lectures in the newspapers.

Indeed, one may claim that no Indian before Vivekananda had ever made Americans and Englishmen accept him on such terms – not as a subservient ally, not as an avowed opponent, but as a sincere well-wisher and friend, equally ready to teach and to learn, to ask for and to offer help. Who else had stood, as he stood, impartially between East and West, prizing the virtues and condemning the defects of both cultures?

On 1st May 1897, he called a meeting of the monastic and householder disciples of Ramakrishna in Calcutta in order to establish their work on an organized basis. What Vivekananda proposed was an integration of educational, philanthropic, and religious activities; and it was thus that the Ramakrishna Mission and the Ramakrishna Math, or monastery, came into existence. The Mission went to work immediately, taking part in famine and plague relief and founding its first hospitals and schools.

The Math was consecrated some time later, at Belur, a short distance downriver from Dakshineswar Temple, on the opposite bank of the Ganga. This Belur Math is still the chief monastery of the Ramakrishna Order, which now has 135 centres in different parts of India and the world including Japan, Europe and America, devoted either to the contemplative life or to social service, or to a combination of both. The Ramakrishna Mission has its own hospitals and dispensaries, its own colleges and high schools, industrial and agricultural schools, libraries and publishing houses, with monks of the Order in charge of them.

In June 1899, Vivekananda sailed for a second visit to the Western world.

By the time he returned to India, Vivekananda was a very sick man; he had said himself that he did not expect to live much longer.

Vivekananda’ entered into Mahasamadhi in Belur Math on 4 July 1902.

The best introduction to Vivekananda is not, however, to read about him but to read him. The Swami’s personality, with all its charm and force, its courageousness, its spiritual authority, its fury and its fun, comes through to you very strongly in his writing and recorded words.

Vivekananda was not only a great teacher with an international message; he was also a very great Indian, a patriot and an inspirer of his countrymen down to the present generation.

You can visit that room in Belur Math, India, in which Swamiji lived; it is still kept exactly as Vivekananda left it.

For further reading:
Vedanta Voices of Freedom by Swami Chetanananda