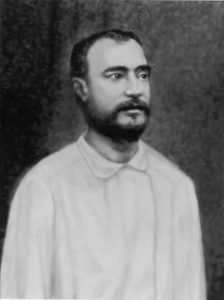 Jogin was one of the six disciples whom Sri Ramakrishna regarded as ishvarakotis. He was spiritually inclined from boyhood. He first met the Master when he was studying for school final examination. Since he lived in the neighbourhood of Kali Temple, he started visiting Sri Ramakrishna frequently.

After the Master’s passing, Jogin accompanied Holy Mother on her pilgrimage. At Vrindavan she initiated him by giving a sacred Mantra. After his return from the pilgrimage he joined Baranagar Math and took the vows of sannyasa, assuming the new name Yogananda. However, he dedicated his life to the service of Holy Mother. Whenever Mother visited Kolkata, Swami Yogananda would arrange for Mother’s accommodation, usually in rented premises, and stayed with her to look after her needs. He also spent some time in Varanasi and other places doing severe austerities which told on his health.

When Swami Vivekananda founded the Ramakrishna Mission on 1 May 1897, he made Yogananda its Vice-President (Swami Brahmananda was made the President). Owing to his delicate health, he did not live long. He passed away on 28 March 1899 at the age of 38, causing much sorrow to Holy Mother and the other disciples of Sri Ramakrishna.