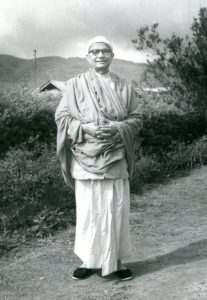 Swami Vishuddhananda, the eighth President of the Ramakrishna Order, was born on Wednesday, 13 June 1883 at Gurap village in Hooghly district of West Bengal. His pre-monastic name was Jitendranath Singha Roy. He was orphaned at his young age and stayed at Kolkata for his further studies. From his childhood, he was meditative by nature and spent much time in spiritual practices. After reading about Sri Ramakrishna, Jitendra was very much moved. So he used to visit Dakshineswar and spent some time there practising spiritual disciplines.

At Dakshineshwar, he came to know about the Holy Mother Sri Sarada Devi. He went to Jayrambati, along with two of his friends, Khagen (Swami Shantananda) and Girija (Swami Girijananda) to meet her and pay homage. They were initiated by the Holy Mother on 16 December 1906, at Jayrambati. Thereafter as they felt an urge to renounce the worldly life, they took ochre robe of monks from the Holy Mother. With her permission they went on foot to Varanasi for tapasya. There they stayed at the Varanasi Advaita Ashrama, where Swami Shivananda formally initiated them into sannyasa.

Swami Vishuddhananda spent his time in meditation and other spiritual practices, while at Varanasi. He later came to the Belur Math and stayed with Swami Brahmananda and other disciples of Sri Ramakrishna.

At the time of sending Swami Vishuddhananda to the Chennai Math as a monastic worker, Swami Brahmananda conveyed his impression regarding him through a remark, “I am sending you a person who knows nothing but God”. Swami Vishuddhananda also served at the Mayavati Ashrama in the Himalayas. In 1922, he became a Trustee of the Ramakrishna Math and a member of the Governing Body of the Ramakrishna Mission. In 1926, he was made the head of the Bhubaneswar Ashrama and then from 1927 to 1952 he served as the head of the Morabadi Centre at Ranchi.

In 1947, Swami Vishuddhananda became a Vice President of the Order and stayed at his favourite place, Varanasi. After the passing away of Swami Shankarananda, he took up the onus of Presidentship on 6 March 1962.

Swami Vishuddhananda was very loving by nature. His motherly affection, compassion and sympathetic understanding of others’ problem made him dear to his devotees. He used to speak to people untiringly on spiritual matters. He inspired many to strive for realizing God. His tenure as the President was of three months only. He left for the heavenly abode on 16 June 1962 at the age of 79.